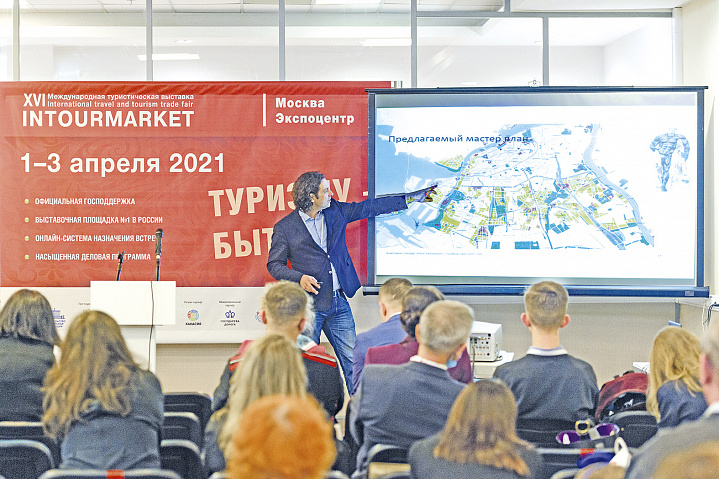 The 16th edition of the Intourmarket International Travel Fair was held in the capital’s Expocenter on Krasnaya Presnya. In view of the pandemic conditions and the partial closure of borders, the theme of the domestic tourism industry development , as well as the launch of a dedicated national project, became the leitmotif of the forum. Under the business program, the issues of attracting investors and developing the corresponding regional infrastructure were specially highlighted.

The Intourmarket Fair has traditionally brought together representatives of almost all regions of Russia, as well as CIS and foreign countries. The stands of the country’s regions offered participants and guests of the exhibition information about new routes, hotels and resorts, museums and exhibitions, as well as trying the authentic treats and attending master classes. Also, the exhibition was attended by the popular with Russian tourists countries — Turkey, Belarus, Bulgaria, Moldova, China, Netherlands, Norway, Germany, Dominican Republic, United Arab Emirates and others. The stands of foreign countries attracted the visitors with exotic lectures, performances and presentations.

At the opening ceremony officials in their welcoming words outlined the priorities and vectors for the development of the travel industry.

It should be emphasized that the attention of the exhibition participants was drawn to conferences on IT-technologies and digital industry, as well as innovations in the museum activities. For a long time, museums, as rather conservative establishments, remained a “thing in itself” relating to tourism. However, in recent years, there have been changes-museums can be transformed in both event venues and centers for the development of tourist infrastructure.

In total, more than 70 speakers addressed the audience at seven business venues of the exhibition, covering almost all the problems and pressing issues of the tourism industry.